Open bidding in 2017 resulted in IET losing a project in New Jersey. Instead of selecting IET, the client chose an approach that used RPI’s CAT 100 technology. Mike Scalzi of IET cried foul, accused the client of infringing IET’s US 7,531,709 patent because of their use of RPI’s technology, and attempted to collect an egregious royalty on the project. Ultimately, IET sued the client in federal court on August 8, 2018, alleging patent infringement of its ‘709 patent. At this point, RPI became involved to defend its technology and the client. As part of that defense, RPI filed an Inter Parties Review in August 2019, challenging the validity of the ‘709 patent.

On January 15, 2021, a three-judge panel of the Patent Trial and Appeals Board (PTAB) at the U.S. Patent and Trademark Office (USPTO) found that “Petitioner [RPI] has established by a preponderance of the evidence that claims 1 – 18 of the ‘709 patent are unpatentable.” (See final written decision) In other words, the panel found IET’s flagship ‘709 patent to be invalid.

In a press release dated June 15, 2015, Provectus stated, “any process that removes halogenated organic contaminants from groundwater that employs an organic hydrogen donor plus ZVI (or other zero valent metal) of any shape and size may well infringe U.S. Patent No. 7,531,709”. Provectus went on to detail examples of hydrogen donors (including molasses) making Provectus’s position clear that injecting ZVI and molasses to dechlorinate chlorinated hydrocarbons would infringe its ‘709 patent.

Following the PTAB’s final written decision, Mr. Scalzi, CEO of IET and one of the two named inventors on the ‘709 patent, contended that RPI’s evidence supporting the decision was weak and regurgitated from previous challenges. In reality, the PTAB found all 18 claims unpatentable based on a new primary prior art reference (U.S. Patent 5,766,929 to Orolin) that the USPTO had not previously considered, in combination with two secondary prior art references (U.S. Patent 5,975,798 to Liskowitz and U.S. Published Appln 2002/0151602 to Vance). 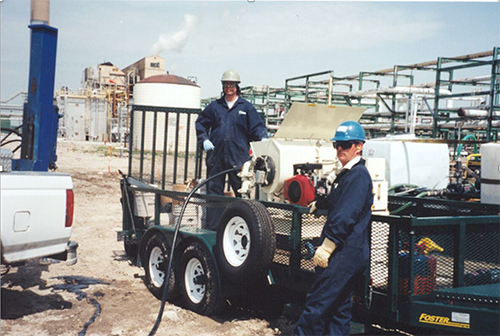 Scott Noland Injecting ZVI and Molasses at Dow Sarnia in 1998

In addition to the reasons for unpatentability that the PTAB set forth in its final written decision, RPI has clear and convincing evidence that Scott Noland, its president, invented the method of injecting ZVI and a carbon source (i.e., molasses) into groundwater to dechlorinate chlorinated hydrocarbons well before Mr. Scalzi’s alleged invention. The picture above shows Mr. Noland on an injection trailer at a DOW Chemical site in Sarnia, Ontario, injecting ZVI and molasses in late 1998, more than four years before Mr. Scalzi filed the provisional patent application, which became the ‘709 patent. More than one year ago, RPI provided IET with clear and convincing documentary evidence that Mr. Noland continued to utilize the ZVI and molasses technology at multiple sites across the USA for several years, all more than one year before the priority date of the ‘709 patent. Thus, not only is the ‘709 patent invalid and unenforceable, Mr. Noland is a prior inventor of the technology claimed in the ‘709 Patent that IET has used to extract fees from our industry for over a decade.

The United States Supreme Court has said it is in the public interest to challenge an invalid patent. See Lear, Inc. v. Atkins, 395 U.S. 653 (1969) (holding that even licensees can stop paying royalties and challenge the validity of a licensed patent because the public should not “be required to pay tribute to would-be monopolists without need or justification.”).

Mr. Scalzi says he will appeal; this is his right. The odds weigh heavily against him. RPI noticed that IET did not provide a link to the PTAB’s decision in their recent press release. Any person who is interested in, provides, or uses the technology disclosed in the ’709 patent may want to read the decision and speak to a patent attorney regarding the current status of the ‘709 patent in light of this decision.

For more information, please contact RPI as we are happy to share any of the non-confidential filings and proceedings that have transpired over the last three years.

Sorry, the comment form is closed at this time.